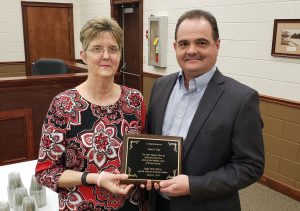 Having served the County of Evans and its community for nearly two decades, Mrs Paula P. Todd has finally decided to retire. She plans to spend more time with her family and especially more time with the grandchildren. She began serving as the Probate Court Clerk in January of 2003 and during that time, became a staple of that department. Probate Judge Darin McCoy stated that it was bittersweet in seeing her leave but is glad to have had her by his side. He continued, “She served her time with honor, dignity and distinction and she will be missed.” Congratulations Mrs Paula!